Emmetten, Switzerland, October 04, 2018 / B3C newswire / -- MetP® Pharma, focusing on the nasal delivery of drugs to the systemic circulation and especially to the brain, today presents its Nascum®-Plus nasal gel. After application, a very thin, imperceptible protective layer forms on the nasal mucosa. This layer physically enhances the natural filtering mechanism of the nose. Allergy-causing particles present in the air are prevented from penetrating deeper into the body. A preclinical study in rats has shown that Nascum®-Plus has a positive effect on the allergic cascade by suppressing the increase in Immunoglobulin E (IgE) serum levels by about 70% (1). The study was performed at the Nofer Institute of Occupational Medicine in Lodz/Poland, the leading institute in the field of occupational and environmental health in Poland, and led by Prof. W. Wqsowicz, head of the Department of Toxicology and Carcinogenesis.

New data from WHO shows that 9 out of 10 people breathe air containing high levels of pollutants such as particulate matter (PM), carbon monoxide, ozone, nitrogen dioxide and sulfur dioxide. PM is the sum of all solid and liquid particles suspended in air such as dust, soot, pollen, adhesives, varnishes and allergens.
Estimations from WHO reveal an alarming death toll of 8 million people every year caused by ambient (outdoor) and household air pollution (2). Various studies have demonstrated the adverse effects of PM on the cardiovascular, respiratory and neurological system as well as its possible effect on the unborn child. Moreover, science has provided essential clues that air pollutants may damage the brain. A recent study published in PNAS shows that long-term exposure to air pollution may impede cognitive performance (3). Thus, air pollution is one of the top environmental risk factors worldwide and a major health concern likely to impose substantial health and economic costs.

Ambient air pollution exposure leads to secretory hypertrophy of nasal epithelium and to acidifying mucus with increased viscosity affecting various lung functions. Allergic rhinitis, chronic rhinitis, and nasal congestion were all shown to be associated with living in larger cities rather than rural areas (4). Additionally, evidence for DNA damage in nasal epithelial cells was found in exfoliated nasal cells of children and adults exposed to air pollution in Mexico City (5).
Several studies have demonstrated that PM exposure both stimulates the nasal epithelial (local action) and generates a systemic response by inducing inflammatory biomarkers such as tumor necrosis factor alpha (TNFα), interleukin (IL)-6 and IL-8 and IgE which can lead to the onset of inflammatory symptoms such as allergies and asthma. It is therefore important to keep the integrity of the nasal passages in order to protect the cells in the tissues from irritation or infection.

Nascum®-Plus forms a physical barrier in the nasal cavity

The majority of allergenic and non-allergenic particles enter the respiratory tract via the nasal cavity. Nascum®-Plus is a gel that forms a thin protective Iayer on the nasal mucosa. The protection is activated immediately and lasts for hours.
By forming a physical barrier on the nasal mucosa, Nascum®-Plus is mitigating the detrimental effects of PM i.e. the gel is interrupting the endogenous reaction chain caused by respiratory hazards and stopping the dramatic increase of IgE (1).
Nascum®-Plus is an oil-based nasal gel and a class 1 medical device according to Directive 2007/47/EC. The gel is based on a patented formulation matrix (Silcum®) which, due to its self­-spreading properties, is able to cover a large area of the nasal turbinates without reducing nose breathing or causing other discomfort. Nascum®-Plus is safe, skin-friendly and non-sedating as well as easy and convenient to apply. It is completely invisible in contrast to the uncomfortable and disfiguring masks used by an increasing number of people in air polluted cities.

Nascum®-Plus contains no drug substances and acts solely by a physico-chemical effect. However, the Silcum® matrix can be formulated for the nasal delivery of drugs to the systemic circulation and especially to the brain.

Dr. Claudia Mattern, Chief Scientific Officer at MetP Pharma comments: “The topical oleogel Nascum®-Plus might be a new and safe anti-IgE therapy which reduces the allergen-stimulated immune responses.  By decreasing the IgE level it keeps the inflammation from developing while current treatments such as antihistamines, corticosteroids or the anti-IgE antibody omalizumab mostly work by reducing the inflammation.” 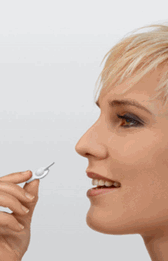 MetP®’s single-dose nasal applicator Lecticula® was among the finalists for the 2016 CPhI Pharma Award in the category "Excellence in Pharma: Drug Delivery Devices".

Cookies make it easier for us to provide you with our services. With the usage of our services you permit us to use cookies.
Ok